Marie Osmond is haunting me 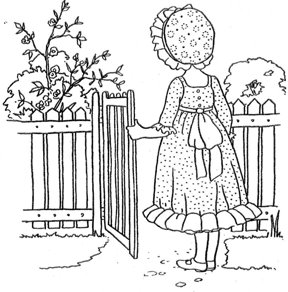 I was mortified this morning. There was my childhood doll and character, Holly Hobby, being “re-introduced” and merchandised to the hilt by Marie Osmond. First of all, Marie. Back away from the plastic surgeon. And second, this is Holly-Frickin-Hobby. I loved her! I loved her so much, I had a bonnet. Yes, I had a bonnet in kindergarten. My mom made it for me. It was that swiss dot material: light pink with slightly raised white dots. And a satin ribbon that tied it under my chin.

But back to this morning. Here’s the excerpt and responsible link to The Oregonian:

Holly Hobbie greets a new generation
The gingham-and-calico girl is back with a new style, still full of the love that made great-grandma famous
There is a certain demographic of woman -- mid- to late 30s, first tooth cavity the result of Pop Rocks -- who will soon be able to revel in an odd juxtaposition of pop-culture resurgence.
Brace yourselves, ladies. Marie Osmond is bringing back Holly Hobbie! 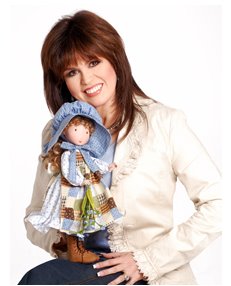 For those of us who once played with our Donnie and Marie dolls while lounging on our Holly Hobbie bedspreads, it's a lot to wrap the mind around: One great 1970s icon helping bring another back from the halls of has-been.

Let’s stop for a moment and ponder this. Okay. I obviously fit this “certain demographic of woman.” That’s weird. That never happens to me. Now I did not have a Holly Hobbie bedspread. I had a rainbow one. Alas, I can’t find it anywhere on the web! But it was similar to the rainbow shirts at the time, which were somewhat like this:

Next week, Osmond will appear on QVC shopping channel to sell her interpretation of the beloved American Greetings classic, "Holly Hobbie." The 19-inch porcelain dolls will go for $49.95 each.
How did this happen?
Well, Marie is a little bit country. So is Holly Hobbie.
Seriously, though.
A couple years ago, Osmond said she heard that Cleveland-based American Greetings Corp. was hoping that the gingham-and-calico girl in the blue bonnet it first introduced almost 40 years ago as a character design on a few greeting cards might still have some marketing mileage.
After all, the Care Bears were back with a vengeance. Strawberry Shortcake dolls were once again flying off the shelves. The Smurfs were hot, hot, hot.
As American Greetings worked out marketing deals with Nickelodeon and Mattel to re-release the character in a new, updated form, Osmond sought licensing rights to create a collectible doll based on the classic original.

"I have always loved Holly Hobbie," Osmond said during a recent interview. "So when I heard that American Greetings was bringing her back, I wanted to be a part of it."
Holly Hobbie debuted in 1967 and by the early 1980s was emblazoned on everything from underwear to coffee mugs. The doll was popular around the same time as the Donnie and Marie Osmond dolls -- with their matching purple and pink outfits.

God, I’m going to end the direct quoting here and now. I just can’t take it anymore. My beloved Holly Hobbie is being co-opted by Marie Osmond. Marie Osmond people! She’s a little bit more than country.
I’m now convinced the country is going to hell in a handbasket. And it’s crafted of light pink swiss dot fabric. And I swear, those scrapbookers are behind this…
Posted by LeLo at Thursday, April 13, 2006

Is Marie "wigging" out or what?

When I was in Kindergarden, my love for Donnie Osmand knew no bounds. I actually owned and played with the Marie and Donnie dolls mentioned above. But don't mess with my Holly Hobbie!

Well, you already know my thoughts on Marie and Hollie, but, you know what? Marie doesn't look too bad in that photo. Maybe if I saw her up close it would be a different story.

You gotta know that all that Utah sun would have done a number on her skin.

I still have my Heather and Amy dolls as well as the minature Carrie, they were Holly's friends. Marie was my hero and now I think maybe I had a little crush on her...

Yeah. Wow. I once saw Marie & her creepy dolls on QVC or one of those shopping channels. On so many levels I found myself getting sad. Oh, I played my Donny & Marie casette tape until it broke when I was 7 years old. I watched their show every week and sang along (I was always a little bit rock n roll). And Holly Hobby. OH BABY. I had several HH night gowns and I WANTED a bonnet. Oh, did I want one.

I about fell on the floor laughing, Lelo, with your "step away from the plastic surgery" comment...

Poor Marie, what with the post-partum(sp?) depression and the marital woes. Still - those dolls are CREEPY and they do not appeal to this demographic. And by this demographic I mean me.

It's not "Donnie". That's a girl's spelling. It's Donny. It's not "Osmand". It's Osmond. Marie hasn't had plastic surgery. She has the same exact face she always had, only older and with different styles of make up. Some of you people writing that stuff... I don't know! Reality check! Donny, Marie and their brothers are actually some of the coolest people. Besides being very kind and going out of their way for even total strangers, they're some of the funniest people I've ever spent time around (Marie especially has a sense of humor that really catches you off guard and cracks you up). They're a lot of fun and you just feel safe and respected around them. Oh, and yes, Marie is very beautiful close up. She is pale. Utah sun isn't like AZ sun. But I've lived both places and I am pale with good skin at age 37. Hmmmmmmmm.