Planning your meaty Thanksgiving dinner (in 1965) 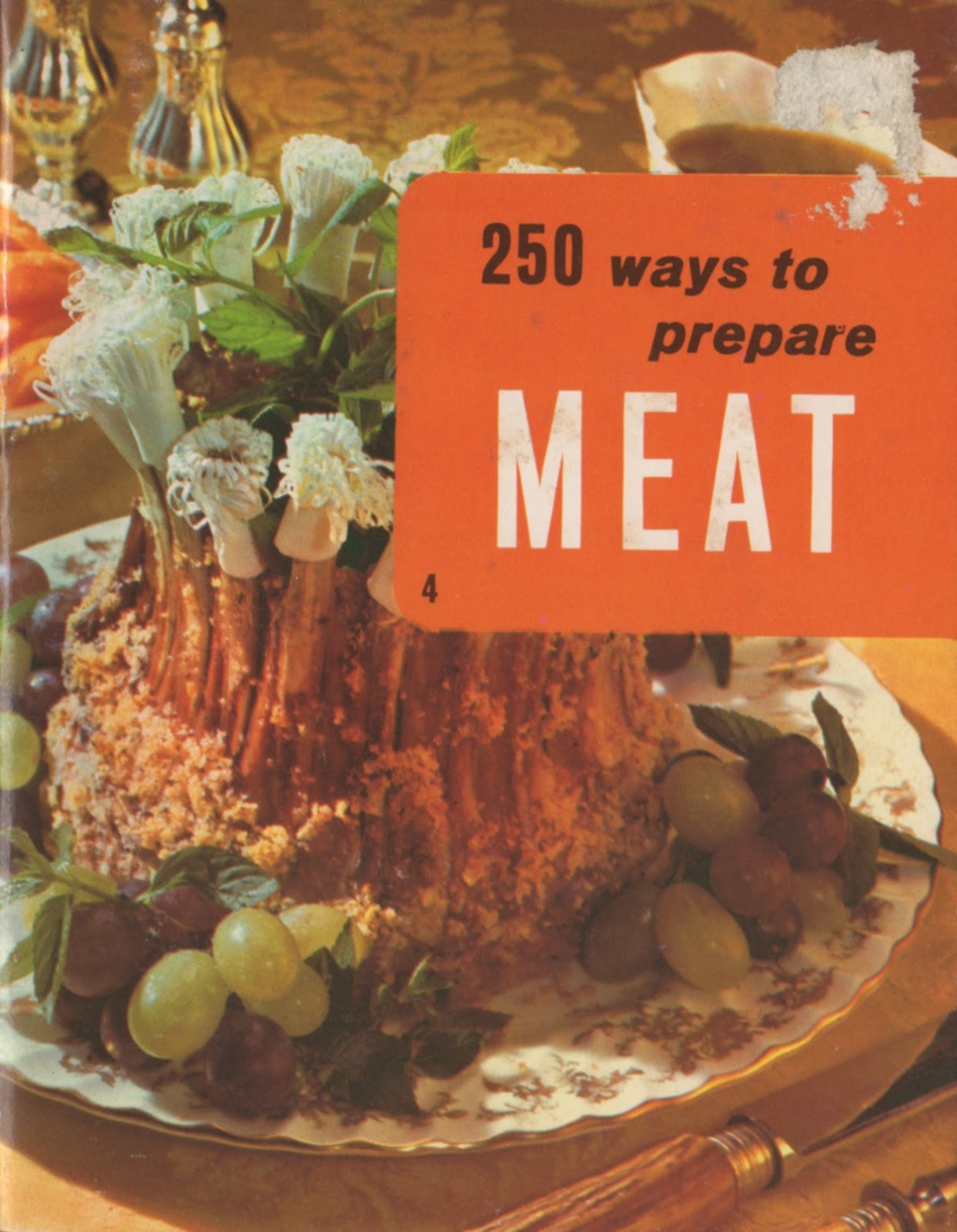 Let's say the year was 1965, and you were faced with Thanksgiving dinner. Perhaps you wanted to forgo the traditional turkey, throw caution to the wind, and live a little. "Let's do something different this year, honey" you would say to your husband. "Let's!" he would reply, and am I the only one picturing him wearing a mock turtleneck? See, I knew you were too.

So off you go to your stack of pamphlets, and of course you start your menu planning with "250 ways to prepare MEAT." So many options, so many choices. But there it is. On pages 24 and 25, there they shine. 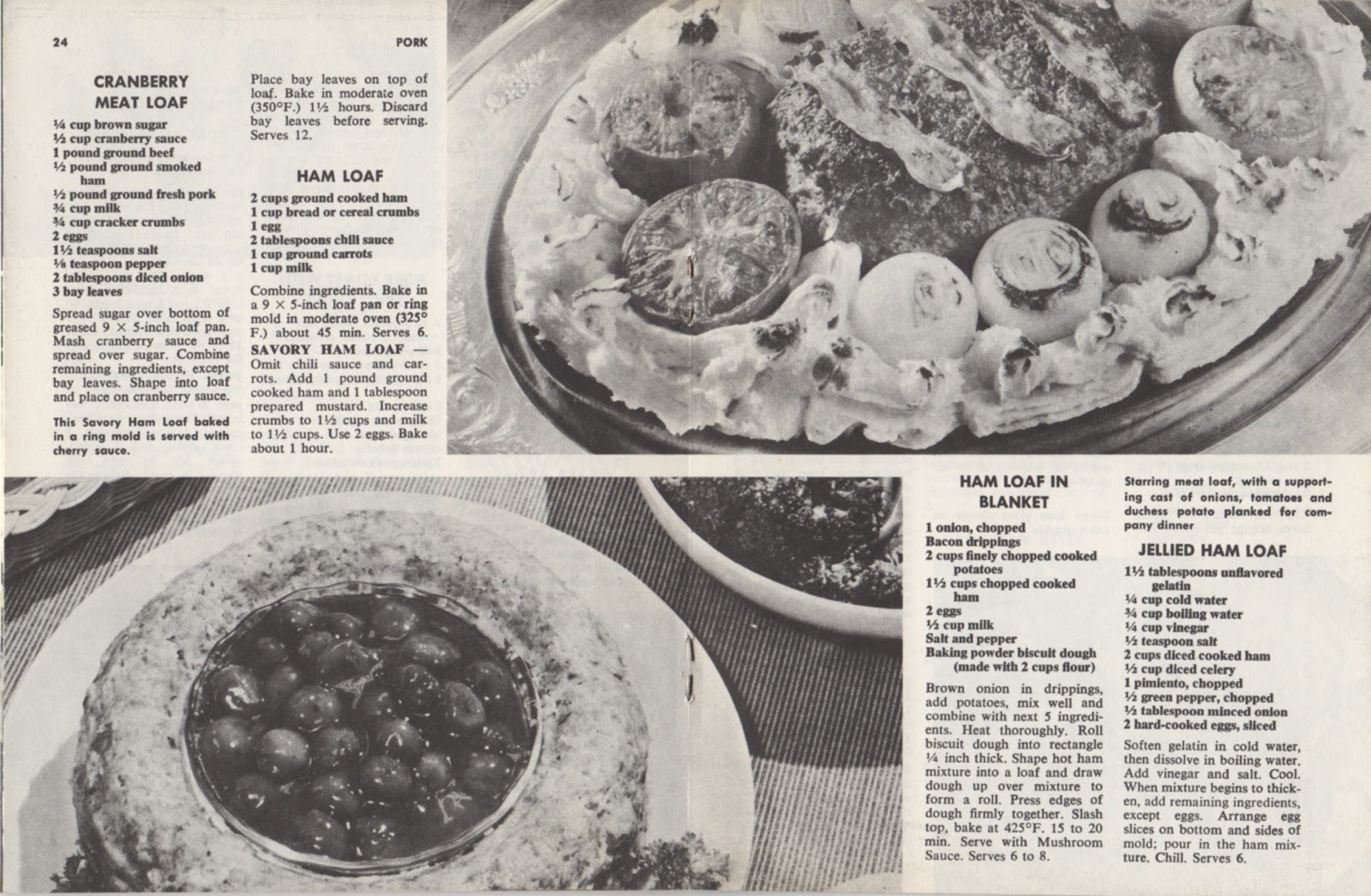 (back to 2012 for a moment)...AdRi and I love playing the "which would you rather" game, listing two things, both pretty terrible, against each other, forcing the other to choose which of them they'd choose if they had to. It can get pretty painful. But wickedly fun. So when faced with, "which would you rather" and the three different ham loafs listed in the book — Ham Loaf, Ham Loaf in Blanket, or Jellied Ham Loaf—after making a face of disgust, went for the Ham Loaf in Blanket. We have a winner!

(back to 1965)....So it's settled. Ham Loaf in Blanket will adorn your Thanksgiving table this year. Here is the recipe. (I'm sure this will soon be wildly pinned all over Pinterest!)

But wait. Flipping through the book, you realize perhaps Ham Loaf isn't the answer this year, because you've found this:

...
I have a large collection of vintage cookbooks and pamphlets. As the holiday season approaches and we're collecting our recipes, I thought it would be fun to take a look to the past menus of those who've come before us and take in some retro fun. Bon appetit!

Email ThisBlogThis!Share to TwitterShare to FacebookShare to Pinterest
Labels: In the kitchen, RetroEphemera, sarcasm

Thanks for the laugh! This was hilarious!

As to the squirrel recipe--be sure to use lemon juice from one of those little plastic lemons.
And the ham loaf in a blanket might not be bad if you omit the bacon drippings and the ham! Have to rename it though. Hugs, Mom

OMG...gotta love those old cook-books. I have one of the cookbooks from when my parents were first married. I swear, almost every recipe calls for shortening...its crazy! I don't remember every having squirrel...but my grandma wasn't averse to serving us rabbit on occasion :-)

Oh man, this is great. I LOVE the old cookbooks. Please post more! And are you really going to make the ham loaf in blanket? Please report back if so.

I LOVE books like these. I collect them when I can. I have one just for Spam. {whispering} I've eaten squirrel and it really does taste a lot like chicken.

Actually when you mentioned saying something about cooking to the husband and him replying with, "Let's" I was laughing. See he wasn't just wearing a mock turtleneck. He was sitting in his easy chair, watching Huntley Brinkley, pipe in his mouth and daily newspaper in hand. He wouldn't be lifting a finger to help with "something different." That's woman's work.