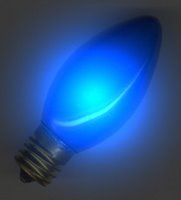 The first non-rainy day after Thanksgiving, and Christmas decorations are flying up all over the neighborhood. They were on roofs yesterday, carefully clipping drippy drips (icicle lights) and imported italian twinkle lights along rooflines, around bushes, and carefully lining walkways with candy canes. (No inflatables in the nearby vicinity. Phew.) I can't wait to see the house down the street where they wrap their window air conditioner up like a gift and a white picket fence pops up just for the holidays, draped in twinkly lights all along the sidewalk.

So the manly men neighbors were out and about putting their decor up, carefully laying out their lights on their carefully raked grass. I said to AdRi it must mean it's time for us to put away our Halloween decorations. And then I heard the whir of a chainsaw. A chainsaw? But there aren't even any trees next door to warrant a chainsaw. I pulled a Mrs. Cravitz and peaked out the window. And there was the neighbor, with his chainsaw, "cleaning up" our butterfly bush which had gotten a wee bit too big for him. ("Impairing his sightline" is what he's called it in the past.) Nothing serious or drastic and I laughed to myself. A chainsaw on a butterfly bush? I had never even thought of that. I know he hates that thing, and probably scoffs at the crazy garden we have.

Vegetable garden in the front and massive amounts of roses and flowers and vines. During other times of the year it looks lovely. But now? Ha. It's a mess. And it will continue to be a mess for the birds this winter, but I don't think it goes along with the perfectly coiffed, edged yards with a house fronted with a picture display window. And that picture display window this year is lit up with a huge plug-in snowman. Wink and I went for a walk last night and she freaked out about it, wanting to charge and bark at it. (It's okay, Wink, it's just a plug-in snowman. Now go potty, here, on this nice grass.)

But the creme de la creme? I turned off the lights in our bedroom last night and a bright blue glow permeated the room. It reflected onto the ceiling. It glowed bright through the drapes. It illuminated everything in the room with a true blue glow. The neighbors blue lights, perfectly placed along his one-story roofline, are directly outside our second-story bedroom.

Perhaps I need a chainsaw.
Posted by LeLo at Sunday, November 26, 2006

It's a conspiracy, "Let your Butterfly bush get all gangly and unsightly. I'll show you, take that! Blue light of DEATH"

I love the blue light... I have blue lights up along the soffits in my kitchen! I have blue icicle lights that are not up yet- but I promise they don't shine in windows of other houses!

Anyhow Lelo ~ I tagged you for a meme over on my blog I hope you'll play along!

I LOVE blue lights during the holidays, lucky you!

I kinda think the idea of a glowing blue bedroom is a good thing...:)

I like blue lights but I love sleeping in a quiet, darkened bedroom even more. Do they keep them lit all night? Ugh! How rude and inconsiderate.

I admire your calm response to his chainsaw vs your bb situation. But I guess confronting a chainsaw wielding neighbor isn't exactly a wise move. Yikes!

A Chain saw on a Butterfly Bush ain't manly. That's more signs of manly inadequacy....like driving a HUGE pickeup when you're 5' 1" tall. I feel sorry about the lights in your bedroom..... SO IF it snows tomorrow at 1000', come on up for football, popcorn, and a snowball fight!!!!

Ha haaa poor Wink! I have to have a completely DARK room but blue lights wouldn't bother me alot I don't think. It's good you can chill about the butterfly bush. With me there would prolly be drama
I cannot believe as yet we have no commentary from his purple twinkieness