Hey there hi there ho there 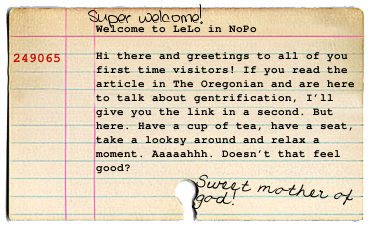 The post about gentrification can be found here.
There's also another one here.

And for you regulars who are wondering what the hell I'm referring to, you can read The Oregonian article here.

But I'd really suggest you start with Steve's great posts first.
Posted by LeLo at Thursday, January 11, 2007

Thanks for the education. I would like to also add to the story about the mattress company that Oregon is one of the few states where people can sell re-furbished mattresses as new without disclosing that information.
Gross.
Yucky.
Disgusting.

PS-BTW
There were a lot of links on that post.
Kind of made me tired.

Interesting article. I haven't really been keeping up with the debate, so now I'm up to speed. Cool that you got quoted. I agree, too, that businesses have an obligation to keep themselves presentable.

I'm grossed out by the thought of used mattresses, though, and I really think they should be sensitive enough to get rid of that Confederate flag.

While I don't have much of an opinion about Dixie Mattress (my two cents are: it doesn't bother me that they have a Confederate Flag on their windows, but can't people other than Yuppies be expected to complain about eyesores?), I find it interesting that the journalist over at the Big O didn't take notice of these complaints until the matter caused a ruckus on Jack Bogdanski's blog.

Wow, that's the second time in as many weeks his blog was mentioned by the folks at the local Newhouse publication; I guess what the rest of us write doesn't matter to them.