Isaac Mizrahi is an ass 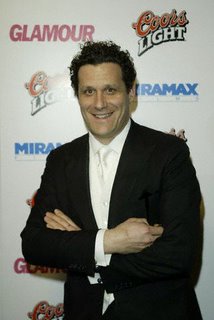 When did it become okay to grab women’s asses, their boobs or ask if they got a brazilian for the Golden Globes? Evidently in Isaac Mizrahi’s little corner of the world, it’s perfectly fine. BLECHT. What an ass.

If you missed it, the red carpet preshow to the Golden Globes was hosted by Ryan Seacrest (hello, I’m obviously in the closet trying very hard to play it straight), some woman I don’t know who she was, and on the carpet with the stars was Isaac Mizrahi. Fashionista, designer, whatever.

On the red carpet, he was obviously out of his league. He didn’t know where to look nor where to hold his microphone. (That could be cute, actually.) But his shtick was based upon asking women if they were wearing any underwear. And then he started grabbing butts, asking “shocking” questions, and totally groping Scarlett Johansson’s boobs. When he did this, she just stood there, totally in shock, and said something along the lines of, “Did he just really do that?”

Yes, he really did. And when they cut away to his cohorts, they asked the same question. Did he really ask Eva if she shaved down there for the special night? And one of them answered, “I guess you can (ask those questions) if you’re gay!”

Hmm. So if you’re gay, it’s okay to grope on women?

But the real crème de la crème was Isaac’s question to the beautiful Charlize Theron. Upon complimenting her, he asked her what’s up with all of her roles being ugly dykes. Yes. He used the word dyke. Charlize was obviously surprised and handled it very gracefully. But come on, Isaac. That is totally not cool. It’s not okay to hate on people like that, and it’s certainly not okay to grab people.

But it’s really bothered me and made me think about it today: the cohort who excused him from his inappropriateness because he’s gay? What’s THAT about? If you’re a gay man, you’re not a “threat” therefore it’s okay to cross social mores and physical boundaries and tweak some titties? I really don’t want to accept that. But the ugly dyke thing is just a lame ass stereotype that should not be perpetuated among the general public. Isaac’s comment may have been okay within a conversation among friends, but on television?!

Okay, I’m done with my rant, but I’m also done with Isaac Mizrahi: he sucks.
Posted by LeLo at Tuesday, January 17, 2006

Well LeLo, I guess what he's saying is that since we're gay, we can walk around grabbing guys in th balls. Hmmmm, how well do you think THAT would go over.

And I'm sorry, I don't have a problem with the word dyke as long as I'm calling MYSELF that (or someone I love, like my friend Shelly!!!!) But other people shouldn't use it. Not cool.

Bring back Kathy G. to E!

I think it's very revealing that that one guy suggested that it's OK that Mizrahi did that stuff cuz he's gay. That says a lot about that guy and how he views gay men--as if they're not really men at all.

Two asses. Not one.

you want to bring back kathy "hey, those are some nice tits" griffith? when reading lelo's post, it immediately reminded me of her last trip down the red carpet when she was so obnoxious, her partner called her out.

I tuned into the pre-show to see what the stars wore. It's so not a part of my life (when would I ever have a chance to dress up in clothes like that? Never!) so I love to do a little voyeuring when it comes to the award shows. But I turned the show off in no time because of the rude and stupid comments from Isaac and I missed the worst of it apparently. I wasn't bowled over by the others either. It seemed all they wanted to do was be bitchy. Yuck!

Crassness comes in all forms of humanity. Gay, straight or bi - doesn't make one whit of difference. Sexual preference isn't a reason or an excuse for rudeness behavior.

On behalf of all gay men I would like to apologize for that ass. It is never okay to grope someone, gay or straight unless you have their permission. Although I do get girls showing me their boobs all the time and saying "it's okay he's gay", sorry ladies but I happen to like boobs. That's probably also why his clothes is now available at Target.

Damn, brain dead...forget the "preference" - I know better, insert "orientation" into that sentence, please. My apologies if I offended anyone. Blame it on the relentless ravings of ignorants. I try to tune them out but they are so blasted loud.

Rigo, that is so weird that you get flashed. Did you at least give them Mardi Gras beads? ;-)

If that what it takes to fondle SJ, sign me up! Just make sure I'm on the pitcher list, not the catcher.