Phelps and clan to picket at miners funeral 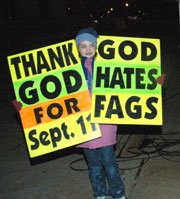 Some people just need to sit down and shut up. And the Phelps family is an example. In today’s press release, the freakshow known as Westboro Baptist Church of Topeka Kansas said, “God is laughing, mocking and deriding hypocritical fag-infested West Virginia.” And thus, they would show up at the funerals of the miners recently killed in West Virginia, and spew their hate and sickness.

The release also states, “They died in shame and disgrace, citizens of a cursed nation of unthankful, unholy perverts who have departed from the living God to worship on ‘Brokeback Mountain’ and who have replaced the Bible with ‘The Da Vinci Code.”

These are the same horrible people who picketed at Mathew Shepherd’s funeral, and were recently in Beaverton to protest the school play about his death.

Now help me understand where the Christian actions are in all of this? I’m so tired of Christianity being hijacked by people like the Phelps and Pat Robertson to further their hatred. Sit down, and shut up.

P.S. Looks like I'll be on top of Brokeback Mountain this Sunday morning in case anyone would like to join me there to worship.
Posted by LeLo at Friday, January 06, 2006

Words fail me. Those are some sick people.

I couldn't comprehend your post at first. I kept thinking I had misunderstood somehow. Then I read the article you linked. Not that it helped. I'm still dumbfounded that anyone could be filled with so much hatred and could even consider heaping more pain on top of what those WV families are already experiencing. Forgiveness, compassion, charity, love, peace, humility . . . those are the tenets of my faith. Their actions are cruelly evil with more in common with the devil than with God and Christianity. What a damn shame.

I wish I could be there to shield the families and friends of the miners who died from such vile behavior.

the only words that i can find are those which i directly quote from the eloquently put comments you placed on my posts for tiny and mindless...."fuckity fuck fuckhead[s]". fanticism is baffling and when you mix it with religion, watch the fuck out, man!

Re: Your PS... You're going to Wyoming this Sunday? I'm confused.

Good God. There are some sick freaks out there. Man...

I'm not going to Wyoming. I was making a funny because the Phelpsfucks state that this country is going to hell because we're worshiping on Brokeback Mountain. Since most worshiping occurs on Sunday mornings, I was referencing doing what they refer to. In my own world in my mind where I imagine these things but not always type them out accurately, Julie Andrews is there on Brokeback with me and she's singing The Hills Are Alive.....

I live in this small town the Phelps group are planning on disrespecting. It won't work. This town is full of hard working, hard playing, good 'ol boys. We protect each other and will DEMAND respect of our fallen miners. These people are stressed. The coal miners have lost thier family members, thier co-workers and thier jobs. This is not going to be a good situation for the WBC.
Just a note: Anyone ever hear of the Matewan Massacre of 1920? 10 dead.....19 suspects....not one conviction.